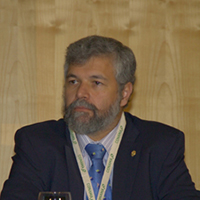 With a training as Doctor in Veterinary Medicine, DVM, and a Ph.D. on Toxicology at the University of Madrid, Dr. Tarazona has since 1982 a permanent research position at the Spanish National Institute for Agricultural Research (INIA). Former Head of the Division of Environmental Toxicology, Dr. Tarazona is after the re-organisation of the Institute, the Head of the Laboratory for Ecotoxicology at the Department of Environmentally Sustainable Development. His scientific activity had been mostly focused on Aquatic Toxicology until 1994, when his interest covered the field of ecological hazard and risk assessment, including both, the aquatic and the terrestrial compartments.
He is actively involved in regulatory aspects, participating in the hazard and risk assessment programmes for new-and-existing chemicals and pesticides within the European Union. He has directly participated as member of the Spanish delegation in the Classification & Labelling and Risk assessment Groups of the ECB, in the UNEP programme on POPs, several ECCO meetings, and several meetings organised by the EU, OECD, SETAC, industry and NGOs. Actually he is the scientific co-ordinator of the co-operation agreements established between the Spanish Ministry of the Environment and the INIA to give scientific advice and technical support in the regulation of chemical substances.
Involved in the scientific advisory board of the European Union since 1992; currently Dr Tarazona is second vice-president of the EUROPEAN SCIENTIFIC COMMITTEE ON TOXICOLOGY, ECOTOXICOLOGY AND THE ENVIRONMENT, DG SANCO, European Commission, and has been external expert-consultant for the EU, the OECD, the WHO and the UN.