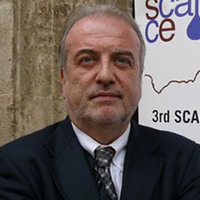 Professor Damià Barceló was born in Lleida, Spain, in 1954. He received his Ph.D. in Analytical Chemistry in 1984. Since 1999, he has been a full Research Professor at the Institute of Environmental Assessment and Water Studies IDAEA-CSIC and the Head of the Environmental Chemistry Department (Barcelona, ES). Since May 2008, he has served as the Director of the Catalan Institute of Water Research (ICRA) (Girona, ES). He has published more than 512 scientific papers in scientific journals and has a Hirsch Index of 60. He is the editor of 13 books on environmental analysis and a co-author of a pesticide book. Other relevant activities include the following: networking experience at the EU (1997-2002); coordinator of the Waste Water Cluster (2002-2004), EMCO (2004-2007) and INNOVA MED (2007-2009) and partner of projects related with water and soil quality at the European Union Level. He has been supervising 24 Ph.D. theses on environmental analysis (1992-2008). In November 2007, he received the Spanish Prize King Jaime I on the Protection of the Nature.
Dr. Barceló’s scientific focus is on method development and monitoring of priority, new and emerging pollutants, including endocrine disrupting compounds, using advanced mass spectrometric analysis such as LC-MS/MS and hybrid instruments like LC-Q-TOF-MS and LCMS- MS-LIT combined with bioassays , biosensors and endocrine effect studies.